Once again, my journey through history has branched into an area previously unknown to me. As is the ‘norm’ of late, a short snorter piqued my interest and led me down this particular path. I picked up this particular short snorter because it featured the signatures of Brigadier Generals Henry Benton Sayler & Robert C Mason along with that of OSS Captain Temple Fielding (Fielding’s Guide to Europe). These names are impressive, and I will start my journey with a brief bio of each, but more impressive to me was the name Edith Jackson. When acquiring this note, the seller noted that Edith Jackson was a Flight Nurse with the Medical Air Evacuation Transport System (MAETS) and flew over 50 missions behind enemy lines at Normandy and the Battle of the Bulge among many other European Theater battle grounds. While researching Edith Jackson, I found a dearth of information surrounding the nurses who volunteered to put themselves in harm’s way in order to save the lives of our soldiers in the field. In fact, these courageous women did not begin to gain mainstream recognition until the mid-1980s.

The concept of air evacuation of soldiers wounded in battle was conceived shortly after the first successful flights made by the Wright Brothers. Over the period between the Great Wars, the air transport planes evolved from simple conversions of commercial aircraft to specialty air craft. However, these early models could not accommodate more than four to six wounded – some of which had to sit rather than lie in a stretcher. The Spanish Civil War (1936-1938) saw the first execution of mass air evacuation of wounded soldiers when the Germans used converted transport planes. This provided a spark of ingenuity to Dr Richard Meiling who was studying in Germany at the time. When he returned to the States, he was commissioned in the US Army as the Air Evacuation Officer, a title that he would solely own in the history of US military aviation. The first Medical Air Ambulance Squadron was authorized on 19 November 1941, consisting of a single headquarters and three aircraft medical squadrons. The initial response to the idea of assigning flight nurses to air evacuation transports was met with the typical chauvinistic attitude of the era in regards to women in the military. The pool of qualified candidates was quite extensive due to a specific requirement of nursing qualifications for stewardesses on commercial aircraft. General David N Grant, Air Surgeon, was finally able to push an urgent appeal through to train nurses for the Army Air Forces Evacuation Services late in 1942. The first group of Flight Nurses graduated from Bowman Field, KY on 18 February 1943. It should be noted that these doctors, nurses, and flight crews were flying into and out of hot combat zones in unmarked C-46, C-47, & C-54 troop transport planes – often without fighter escort. Not only did they place themselves in harm’s way treating and loading the wounded soldiers onto their aircraft, they were subject to aerial assault by enemy forces.

Prior to Operation Overlord, the MAETS Squadrons were assigned  Troop Carrier Commands. On D-Day plus four, the squadron began evacuation of the Normandy wounded. As the Army fought forward into German held territories, the C-47’s would fly in necessary supplies and the medical crews. After the supplies were off-loaded, the Flight Nurses and Corpsmen converted the C-47 to receive ambulatory and litter patients. Often times, when this conversion was being done, the medical crew was performing under intense enemy fire and bombing. With emphasis on the crucial time elements, the aircraft was converted and patients loaded. The pilots of the C-47s had to fly at treetop level to avoid detection and often did not have fighter escort. This cycle would continue until all the wounded were transported. As the war progressed, MAETS squadrons would follow the ground troops on the front lines as the Allied Forces stormed to Paris and Berlin. These same processes were in operation during the North Africa Campaign, Italian Campaign, and Throughout the Pacific Theater. These brave women served bravely alongside their surgeons in the field and flight crew in the air. They held the highest regard for their wounded brothers. The women that I found on this particular short snorter served behind the lines at Normandy and the Battle of the Bulge along with the steady fight from the beaches to Paris and Berlin. To the soldiers in their care they were angels of mercy. To their following generations, they were the unknown inspiration for the ever advancing areas of field medicine such as the Mobile Army Surgical Hospital (MASH) Units that were first utilized during the era of the Korean Conflict. However, these pioneers remain as a piece of lost or forgotten history. They never wanted glory or accolades, their mission was to bring every possible soldier home. For this we can never thank them enough.

I would like to personally thank all members of the MAETS program, without these brave souls, many generations of Americans would not have lived the memories of time with loved ones. Edith Lewis flew over 50 missions during the war, all to front line units like Normandy. 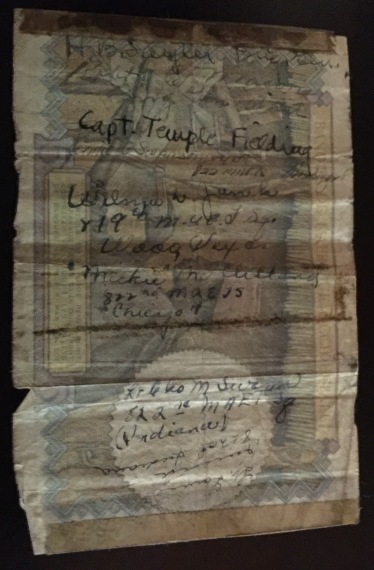 Names and units from my Short Snorter (married names in parenthesis)

With the United States entry into the War, Sayler’s old West Point Classmate, now Commanding General of the U.S. Forces in the European Theater of Operations, Dwight D. Eisenhower, appointed him as Chief Ordnance Officer of ETO. In this capacity, Eisenhower tasked him to plan, assemble, and execute the logistical support for the North African invasion.During D-Day invasion he solved many problems which include waterproofing of vehicles and disposing bombs which didn’t explode. Due to his great work at that time, U.S. Forces was one of the best equipped fighting force in the history of warfare.

In April 1942, Macon, now a colonel, took command of the 7th Infantry Regiment, 3rd Infantry Division. He commanded the regiment during Operation Torch, the invasion of North Africa in November 1942, and the subsequent occupation of French Morocco. In February 1943, he was promoted to brigadier general.

In April 1943, Brigadier General Macon was appointed as assistant division commander of the 83rd Infantry Division. He succeeded Frank W. Milburn as commanding general of the division in January 1944 and was promoted to major general on June 1, 1944.

Major General Macon commanded the 83rd Infantry Division during operations in Normandy, including Operation Cobra and the drive on Saint-Malo. The division then screened the Allied advance along the Loire River Valley, and accepted the surrender of 20,000 German troops at Beaugency. The division drove through Lorraine and into Luxembourg, and then fought in the Battle of the Bulge. In 1945, the division advanced through Germany and linked up with Soviet troops on the Elbe in April.

OSS Captain Temple Fielding:
Temple Fielding was a noted travel writer. During World War II, he was a psyop operative in Europe under the Office of Strategic Services (OSS) Morale Operations Branch (MO) unit, 2677th Regiment OSS (Provisional). The “2677” was the subject of an inside joke at MO Rome, since the Pantone color code for the ink used in the forgery of the 6 pfennig Hitler head stamp was 2677. MO Rome was headed by Eugene P. Warner, a civilian, formerly of the Associated Press. 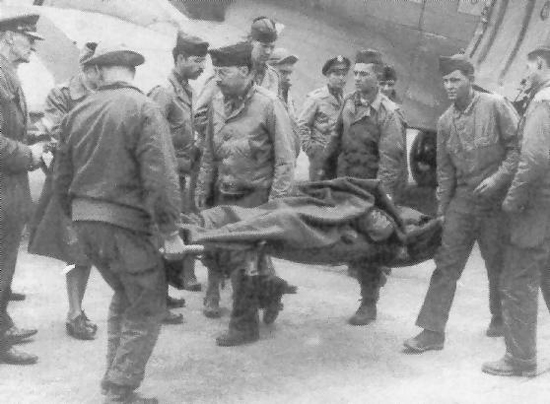 Published by Ask the Chief

​Retired US NAVY CHIEF PETTY OFFICER who firmly believes and follows the following creed: "During the course of this day you have been caused to humbly accept challenge and face adversity. This you have accomplished with rare good grace. Pointless as some of these challenges may have seemed, there were valid, time-honored reasons behind each pointed barb. It was necessary to meet these hurdles with blind faith in the fellowship of Chief Petty Officers. The goal was to instill in you that trust is inherent with the donning of the uniform of a Chief. It was our intent to impress upon you that challenge is good; a great and necessary reality which cannot mar you - which, in fact, strengthens you. In your future as a Chief Petty Officer., you will be forced to endure adversity far beyond that imposed upon you today. You must face each challenge and adversity with the same dignity and good grace you demonstrated today. By experience, by performance, and by testing, you have been this day advanced to Chief Petty Officer. In the United States Navy - and only in the United States Navy - the rank of E7 carries with it unique responsibilities and privileges you are now bound to observe and expected to fulfill. Your entire way of life is now changed. More will be expected of you; more will be demanded of you. Not because you are a E7 but because you are now a Chief Petty Officer. You have not merely been promoted one paygrade, you have joined an exclusive fellowship and, as in all fellowships, you have a special responsibility to your comrades, even as they have a special responsibility to you. This is why we in the United States Navy may maintain with pride our feelings of accomplishment once we have attained the position of Chief Petty Officer. Your new responsibilities and privileges do not appear in print. They have no official standing; they cannot be referred to by name, number, nor file. They have existed for over 100 years, Chiefs before you have freely accepted responsibility beyond the call of printed assignment. Their actions and their performance demanded the respect of their seniors as well as their juniors. It is now required that you be the fountain of wisdom, the ambassador of good will, the authority in personal relations as well as in technical applications. "Ask the Chief" is a household phrase in and out of the Navy. You are now the Chief. The exalted position you have now achieved - and the word exalted is used advisedly - exists because of the attitude and performance of the Chiefs before you. It shall exist only as long as you and your fellow Chiefs maintain these standards. It was our intention that you never forget this day. It was our intention to test you, to try you, and to accept you. Your performance has assured us that you will wear "the hat" with the same pride as your comrades in arms before you. We take a deep and sincere pleasure in clasping your hand, and accepting you as a Chief Petty officer in the United States Navy.." View all posts by Ask the Chief